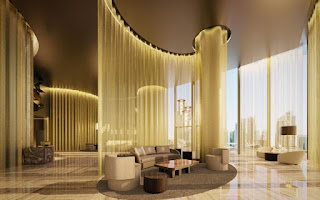 The lobby at DAMAC Residenze (All Pictures: SUPPLIED)
The ceilings, the walls and the floors - everything - in the bespoke apartments in Dh1.2-billion Damac Residenze project will be designed by Fendi Casa, Italian luxury house.
And those seeking to live in these exclusive units. from the 43rd to 84th level, in Dubai Marina will have to fork out Dh30,000 per square metre (Dh2,788 per square feet) to own them.
Damac Properties, a Dubai-based developer which has 68 towers under construction, said on Sunday that the 350-metre-high tower is already
under construction and is scheduled for completion in 2016.

The project, which has over 200 units, is being constructed by Arabtec, said Ziad El Chaar, Managing Director, Damac Properties.

Although the company brochure does not reveal the size of a one-bed apartment or penthouses, a 1,200 square feet unit will cost over Dh33 million while 3000 square feet penthouse will cost more than Dh84 million.

Asked if Damac will contain “flipping” of units in the project, El Chaar said the company was focusing on getting end-users from India, the UK and Russia, it did not have any regulations to prohibit resale by investors.

'Emirates24/7' reported earlier that investors in Emaar Properties’ The Address Fountain Views project were not allowed to resell their units
unless they have made a 40 per cent payment.

The developer also unveiled the SR800-million Damac Esclusiva Luxury Service Apartments, a 150-metre-high tower overlooking the Kingdom
Tower in Riyadh, Saudi Arabia, in association with Fendi.
The tower will have 100 luxury serviced apartments is under construction. It is scheduled to be completed in 2016.

Emphasizing on the recovery of the regional real estate market, Hussain Sajwani, Chairman, Damac Properties, said, “The real estate market in both Riyadh and Dubai are again performing strongly, especially in the high-end, luxury sector. We believe there will be a very high level of anticipation for these apartments from nationals and overseas investors.”

Damac has completed 37 buildings to date with 7,817 units, there are 10,000 units are under design and development. The company’s new
hospitality division is set to manage 4,000 hotel apartments by end-2013.

3:54 AM
3:54 AM
Email ThisBlogThis!Share to TwitterShare to FacebookShare to Pinterest