Nakheel's beachfront project on Dubai's Palm Jumeirah sold out
33 studios were priced at Dh1.1m; Project to be handed over by 2015 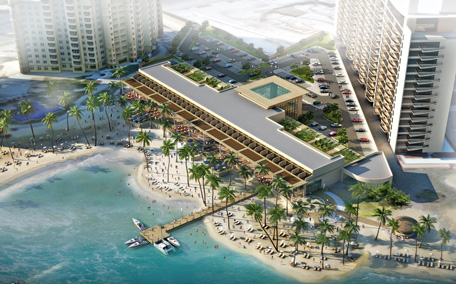 The 33 studio apartments in the Club Vista Mare, a beachfront residential and recreation project on the Palm Jumeirah, were sold out on the launch day itself with investors paying Dh23,000 per square metre.

Ali Rashid Lootah, Chairman, Nakheel, told Emirates 24|7: “We have sold all the 33 units that we had launched today (Sunday)as there is demand for properties on the Palm. Besides, these units were quite reasonably priced.”

In May 2012, Nakheel had launched Palm Views, a collection of 192 “pied-à-terre” style contemporary units with retail, dining and fitness facilities.

The 46.45 sqm studio apartment with a fully-equipped kitchen were priced for Dh1 million, The developer has commenced construction and expects to complete the project by Q1 2014.

The new price is almost 7 per cent over May 2012 launch price.

Club Vista Mare, which will be directly linked to the Dh2.5 billion Nakheel Mall and Hotel, will include eight cafes and restaurants, retail areas and gymnasium facilities.

Lootah said they will soon commence taking reservation for leasing of retail space and restaurants. Membership for the beach club will also be available for residents on the Palm.

Construction is scheduled to begin in mid-2013, with anticipated completion by early 2015.

Last week, Nakheel said it will commence construction on Dh2.5 billion Nakheel Mall on Palm Jumeirah this year and is expected to open it in 2016.

The mall will have a gross floor area of 424,000 square metres, including five retail levels and three basement parking levels with 4,000 parking bays.
5:46 AM
5:46 AM
Email ThisBlogThis!Share to TwitterShare to FacebookShare to Pinterest