An ongoing and live project, The World is nine kilometres wide and seven kilometres long. It covers an area of 931 hectares and will add 232km to Dubai’s natural 67km of beachfront and the islands range from 150,000 to 450,000 square feet in size. All of the individual islands have been reclaimed and to date 145 islands have been sold – but are these eroding as we speak?

Nakheel official testifies that no island requires maintenance work to maintain reclamation effect.
They state that no erosion has taken place on The World islands and none of the islands require any maintenance work necessary to maintain the effect of reclamation. Summarising the recordings of their site visit to The World islands on May 21, 2012, in The World vs. Penguin Marine Boat Services case, the tribunal said: “We were told that there have been no substantial problems with erosion of the reclaimed islands or with the silting of the separating channels and that remedial works would be carried out if they were to become necessary.” 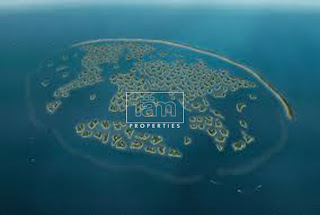 Christopher Goshow, a licensed professional coastal engineer from the state of Florida, USA, who has extensive experience of waterfront developments projects in the Middle East, including many islands in The World, was present during the site visit and also gave evidence, which wasn’t challenged at all.

Ali bin Thalith, Director, Nakheel Marinas at Nakheel, also told the tribunal that: “To the best of his knowledge, no maintenance work necessary to maintain the effect of reclamation is, or has been required on any of the islands. If it is required The World would seek to carry it out.”

Ali Mansour, Director Projects, Marine and Civil Works, in a detailed presentation, said that there would certainly be “slight” erosion of the beaches due to tidal waves but the islands were well protected from waves and currents by an oval frame or breakwater.

The breakwater, which is segmented into six portions, has a total perimeter of 26 kilometres, which significantly reduces any impact from waves or current.

The breakwater was completed in December 2007 and 30 million tonnes of rock were used to construct it.

“When you have waves, you have erosion. You have currents, you have some erosion. But when you don’t have both and just tidal movement, you have minimum or controlled erosion which can be compensated at a later stage with the reshaping of the islands,” he said.

1:16 AM
1:16 AM
Dubai Projects, The World Islands Project
Dubai - United Arab Emirates
Email ThisBlogThis!Share to TwitterShare to FacebookShare to Pinterest