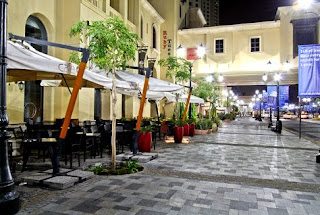 via arabianbusiness.com
Dubai Properties Group (DPG) has unveiled plans to revamp JBR’s popular ‘The Walk’ retail and hospitality venue, including installing escalators to entice visitors up to the plaza level and a new hotel and beach club along the beachfront.
As part of the enhancements, ‘The Walk’ street level will be installed with improved “streetscaping” and escalators will be added to entice more visitors to visit the stores and outlets on the plaza level.
Upgrades will also be made to the Plaza level areas at Bahar and Rimal, including a new children’s play area and private areas for JBR residents.
In addition, DPG has also announced plans for a new boutique hotel and beach club located between the Hilton Dubai Jumeirah and the newly constructed Al Fattan Crystal Towers.
Earlier this year, Sheikh Mohammed bin Rashid Al Maktoum, the UAE Vice President and Prime Minister of the UAE and Ruler of Dubai, approved plans for a AED6bn ($1.6bn) island development off the coast of JBR, including what will be the world’s tallest Ferris wheel.
The Bluewaters Island project will be one of the largest tourism hot spots in the world, according to the Dubai-based developers Meraas Holding. Revealing the project, Meraas said the Dubai Eye would cost AED1bn and be the feature of the development.
Market studies forecast that the Bluewaters project will draw more than 3m visitors annually, the WAM news agency said.
A 1km-long mall is also currently being developed along JBR’s beachfront. The development, also being built by Meraas Holding, will be a low-rise building running from the Hilton Hotel at one end to the Sheraton at the other and is expected to be completed early next year.
Taziz, the management company responsible for JBR, said the various bodies were also looking to tackle the increased traffic problem in the area, especially in light of the recent high profile developments planned offshore and along the beachfront.
“We are also looking at strengthening the police presence at The Walk to assist pedestrians and to better manage the traffic,” Taziz said in a notice to JBR residents.
9:09 AM
9:09 AM
Buy Property in Dubai
Dubai - United Arab Emirates
Email ThisBlogThis!Share to TwitterShare to FacebookShare to Pinterest