Chinese Investors are Changing the Face of Dubai

About 15 miles from the Burj Khalifa on the edge of the Arabian desert is a growing housing and retail community that would look more at home in Beijing than Dubai: Stores and restaurants have Chinese signs and a huge dragon sculpture adorns the Dragon Mart shopping mall.
After pouring billions of dollars into cities including London, New York and Sydney, individual investors and developers in China are expanding into Dubai.
About a thousand individual Chinese investors spent 1.3 billion U.A.E dirhams ($353 million) on land, residential units and office real estate in Dubai last year, according to data from the Dubai Land Department. That is a nearly threefold increase from the 486 million dirhams spent by 288 Chinese investors in the previous year.
Overall, property transactions by individuals in the emirate climbed 53% last year to 236 billion dirhams, with foreign investors buying 114 billion dirhams of land and property.
Chinese investors and developers weren't very active before 2009, when Dubai was hit by a real-estate crisis. But they now play an increasingly important role in the market, according to brokers, developers and analysts.
Demand from individual buyers is helping launch new developments and fueling Dubai's residential recovery, while Chinese contractors and banks are revitalizing high-profile projects that stalled in the previous boom.
Built in 2004 on the outskirts of the city, Dragon Mart was developed by Nakheel, one of Dubai's biggest government-owned developers. It has become such a popular mall that Nakheel is now adding 177,000 square meters (1.9 million square feet) of retail space and a hotel.
Around this retail Mecca, a Chinese community has sprung up in a residential estate called International City, which also was built by Nakheel. The developer estimates that half the population of about 100,000 in International City is from China.
What's more, about half a new development of about a thousand town houses has been sold to Chinese investors, according to Ali Rashid Lootah, the chairman of Nakheel.
Many wealthy Chinese seek to invest abroad to diversify. They find Dubai attractive partly because they believe they can achieve returns of as much as 30% annually—better than Hong Kong, Shanghai and Beijing, where real-estate markets are cooling, according to brokers, analysts and investors.
Underpinning Chinese residential investment are greater commercial trade ties between the U.A.E. and China, noticeably in commercial real estate. Chinese developers, both private and state-owned, are expanding throughout the world as they seek stable returns outside their slowing home market.
Last year in Dubai, state-owned China State Construction Engineering Corp. bought an undisclosed stake in the $1 billion Viceroy Hotel on the Palm Jumeirah. It created a joint-venture development company with Dubai-based developer SKAI Holdings to build and manage the project, and helped the venture win $201 million in financing from Industrial and Commercial Bank of China, according to executives at China State Construction and SKAI.
China State Construction is known for building some of the highest-profile works in China, including the national swimming center in Beijing known as the Water Cube and Hong Kong International airport. 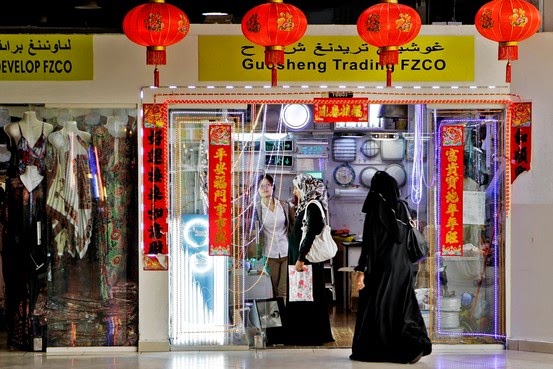 3:08 AM
3:08 AM
Chinese investors, property investment
Email ThisBlogThis!Share to TwitterShare to FacebookShare to Pinterest